You are now leaving www.esmya.com. Links to other websites are provided as a resource to our visitors.

Gedeon Richter accepts no responsibility for the content of other websites.

* Esmya® is indicated in the EU for intermittent and pre-operative treatment of moderate to severe symptoms of uterine fibroids in adult women of reproductive age1.

EU SmPC
The latest version of the Esmya® 5mg EU SmPC, can be found here.

Study objectives
To investigate the efficacy and safety of repeated 12-week courses (3 months) of 5 or 10 mg daily of UPA (ulipristal acetate) for intermittent treatement of symptomatic uterine fibroids.

Study objectives
To investigate the efficacy and safety of ulipristal acetate (UPA) for long-term treatment of symptomatic uterine fibroids.

Design of PEARL III study + extension
PEARL III and its extension were long-term Phase III, multicentre, open-label trials of UPA, open labelled and placebo-controlled toward the administration of progestin after each ulipristal acetate treatment course.

† Amenorrhoea defined as no bleeding for a continuous period of ≥35 days (1 day of spotting allowed).
‡ Quality of Life was measured by general EQ-5D questionnaire and the Uterine fibroid symptom and health-related quality of life (UFS-QoL) questionnaire.
§ Pain was measured with the short-form McGill pain questionnaire.

Study objectives
To demonstrate non-inferior efficacy of Ulipristal Acetate (UPA) versus Gonadotrophin Releasing Hormone (GnRH) agonist in reducing, prior to surgery, excessive uterine bleeding caused by uterine fibroids. The co-primary safety objectives were to show a superior safety and tolerance of UPA versus GnRH agonist in terms of serum oestradiol levels at end of treatment (week 13) and the proportion of patients with moderate-to-severe hot flushes during treatment.

Ulipristal Acetate versus Placebo for Fibroid Treatment before Surgery43

All patients had Hb<=10.2g/dL at screening and received concomitant administration of iron.

PEARL I, PEARL II, PEARL III and III extension, PEARL IV are Phase III clinical trials conducted mainly in Europe, all of them have been completed to date. These four studies included pre-menopausal adult women with symptomatic uterine fibroids characterised by heavy menstrual bleeding and eligible for surgery7,42,43,44,45,.

a randomized, parallel-group, double-blind, placebo-controlled, phase 3 trial involved 241 patients. The primary objectives of PEARL I were to demonstrate superior efficacy of ulipristal acetate versus placebo, to reduce excessive uterine bleeding and to reduce total fibroid volume prior to surgery.

PEARL III and its extension were long-term Phase III, multicentre, double-blind, open-label trials of UPA, open-labelled and placebo-controlled toward the double-blinded administration of progestin (norethisterone acetate [NETA]) after each course to explore any effect on histological endometrial changes and on timing and magnitude of the next menstruation, off-treatment.

PEARL IV was a Phase III, multicenter, randomised, double-blind, parallel-group, long-term study investigating the efficacy and safety of UPA 5 mg (ESMYA®) and 10 mg daily for the treatment of uterine fibroids.

Esmya® directly acts on the endometrium, the fibroids and the pituitary gland1.

Discover the mode of action of Esmya®

Esmya® is approved in the European Union for long-term management of symptomatic uterine fibroids1.

Until now, uterine fibroids were commonly treated surgically with or without short-term pre-operative medical treatments with either SPRM (Ulipristal acetate 5mg – Esmya®) or GnRh-Agonists.

There was a growing demand from patients for a long-term medical treatment, as surgery may not be a suitable option for all of them, e.g. for medical or personal reasons or  in perimenopausal women who would rather wait for the symptoms of uterine fibroids decrease as result of menopause or women who are planning  to  become pregnant in the future.

Since 2015 Esmya® is approved  for the intermittent use in moderate to severe symptoms of uterine fibroids1 providing the first long-term medical treatment option for many women. 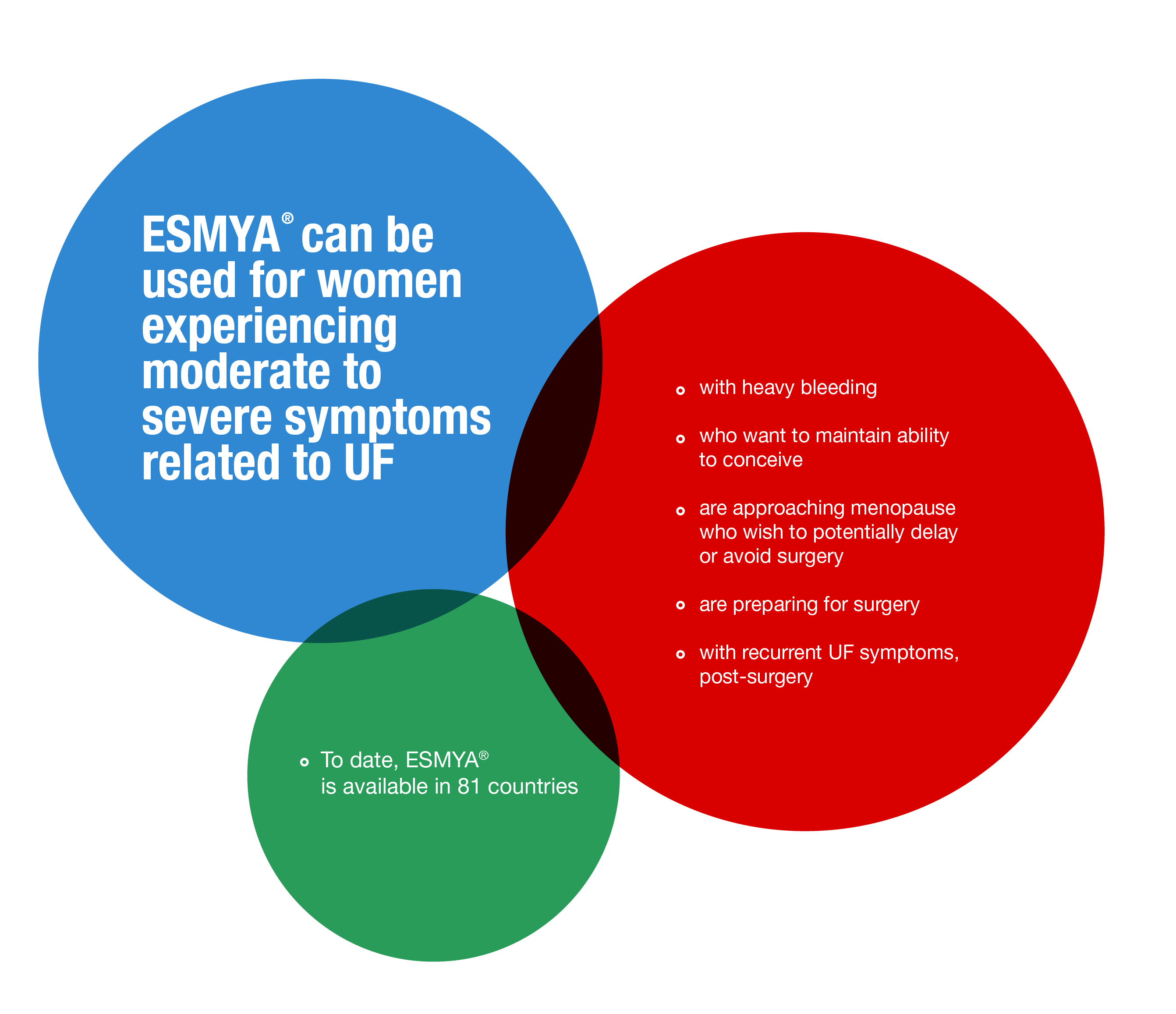 This website uses cookies to improve your experience while you navigate through the website. Out of these, the cookies that are categorized as necessary are stored on your browser as they are essential for the working of basic functionalities of the website. We also use third-party cookies that help us analyze and understand how you use this website. These cookies will be stored in your browser only with your consent. You also have the option to opt-out of these cookies. But opting out of some of these cookies may affect your browsing experience.
Necessary Always Enabled
Necessary cookies are absolutely essential for the website to function properly. This category only includes cookies that ensures basic functionalities and security features of the website. These cookies do not store any personal information.
Non-necessary
Any cookies that may not be particularly necessary for the website to function and is used specifically to collect user personal data via analytics, ads, other embedded contents are termed as non-necessary cookies. It is mandatory to procure user consent prior to running these cookies on your website.
SAVE & ACCEPT
7fc16655c1
/wp-admin/options-general.php?page=emc2-popup-disclaimer%2Femc2pdc-admin.php
65dc6cecd1
2090
1
Accept
Decline
http://fibroidsconnect.com/
1

For Healthcare Professionals only