You are now leaving www.esmya.com. Links to other websites are provided as a resource to our visitors.

Gedeon Richter accepts no responsibility for the content of other websites.

One of the largest pharmaceutical multinationals in Central Eastern Europe

Headquartered in Hungary, Gedeon Richter Plc. is one of the largest pharmaceutical multinationals in Central Eastern Europe, with an expanding direct presence in Western Europe in the field of gynaecology. On a mission to improve the quality of human life, the company’s objective is to deliver advanced and affordable medicines to the public.

A 112-year-old company present in more than thirty countries

It was in 1901 that the company’s founder, pharmacist Gedeon Richter obtained a license to produce medicines. He bought “Sas” pharmacy, still today owned and operated by the company, and started small-scale pharmaceutical production. The young pharmacist always recognized and took advantage of new opportunities, laid great emphasis on innovation, product quality and international relations. Today, Richter is present in more than thirty countries thanks to its five production sites, thirty representative offices, thirty-five commercial subsidiaries and wholesale joint ventures.

Development of generic drugs and chemical processes as well as biotechnology

Innovation has been a defining element of Richter’s strategy since its establishment. Today, with a 1000-strong research and development team in Hungary, the company boasts the Central-Eastern European region’s largest centre for pharmaceutical research. Original research focuses on CNS disorders, with main clinical targets being schizophrenia, anxiety, chronic pain and depression, as well as the treatment of benign gynaecological conditions. Richter is also engaged in the development of generic drugs and chemical processes as well as biotechnology. When compared with other firms in Central Eastern Europe, Richter spends the highest ratio, on average 10 per cent of its revenue, on R&D. 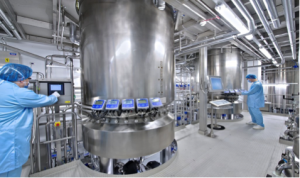 The Richter brand is known all over the world. The Richter Group produces about two hundred pharmaceutical products in more than 400 presentations. The product portfolio covers almost all important therapeutic areas, including gynaecology, central nervous system and cardiovascular. Thanks to its internationally acknowledged expertise in steroid chemistry, Richter is a leading player in the field of gynaecology worldwide. Furthermore, the biotechnological facilities, among them a new plant in Hungary, will help the Company expand its product portfolio with products offering high added value.

About Richter and PregLem SA

PregLem Holding SA, the wholly owned subsidiary of Richter, is a Swiss speciality biopharmaceutical company, based in Geneva, dedicated to the development and commercialization of a new class of drugs for women’s reproductive health conditions.

In February 2012, PregLem announced full results of PEARL I and II studies on the use of ulipristal acetate (Esmya®) in the pre-operative treatment of moderate to severe symptoms of uterine fibroids in adult women of reproductive age.
In the following months, the company filed for the initial marketing authorization by the European Commission, which was successfully granted.

In May 2015, Gedeon Richter Plc. announced that the European Commission (EC) has granted an extension to initial indication – an approval for the intermittent use of Esmya® 5mg in the long-term management of uterine fibroids (myomas). This decision follows a positive opinion from the Committee for Medicinal Products for Human Use (CHMP) of the European Medicines Agency (EMA) on 23 April 2015 and is applicable for all Member States in the European Economic Area.

The recent approval provides an opportunity for women to benefit from long-term medical management of uterine fibroids and potentially avoid surgery.

The approval is based on the assessment of two long-term Phase III studies, PEARL III extension and PEARL IV, involving 132 and 451 patients respectively, both designed to evaluate the efficacy and safety of ulipristal acetate (Esmya®) as a long-term treatment of uterine fibroids.

For Healthcare Professionals only